Graffiti mars the once pristine walls of the Assam Women’s University (AWU) at Jorhat.

The caricatures and depictions voice the angst of the students and remain mute witnesses to the empty classrooms.

‘We want to compete’, ‘Hear our voice’,  ‘Women of the world unite’, ‘There is no force more powerful than a women determined to rise’, and ‘Gender shouldn’t determine ones right to be educated’ are just some of the writings on the wall. 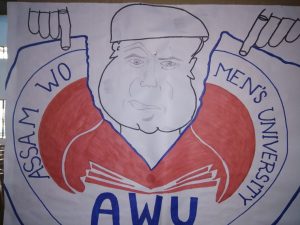 The others are of female figures, fiery female warriors determined to take the fight right up to the end.

The impasse continues, completing a month on Wednesday, since the students began boycotting classes to protest on International Women’s Day, the proposed degradation of the university to a technical institute. 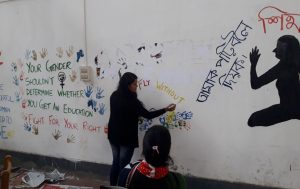 The three-day deadline set by the AWU Students’ Forum for the government to give it in writing that it has no intention of downgrading it into a technical institute or something else and in what way do they plan to strengthen and protect it as stated in the Assam Legislative Assembly by Education Minister Sarma and Speaker Hitendra Nath Goswami, has been ignored.

A notification by the Registrar, A Hazarika, of the University to the students on Wednesday requesting them to return to classes and bring back the educational atmosphere as the Speaker Hitendra Nath Goswami, who is also MLA of Jorhat, had assured that the AWU would be protected on the floor of the Assembly, a few days ago, is being taken with a pinch of salt. 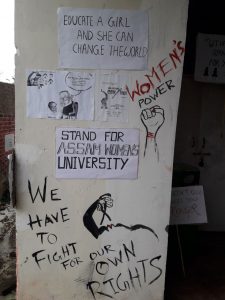 “We will decide what to do after we meet him (Goswami) when he returns to Jorhat in a few days.  Till then no one is going to attend classes,” a students’ representative said.