Nagaland Governor P B Acharya on Monday said the present education system in the country was based on what the British had outlined and was promoting a kind of knowledge that made people ‘self-centred, besides leading to obliteration of indigenous languages’.

Speaking as chief guest at the ‘Academic Assembly and Felicitation to Prominent Personalities, Governor Award and Scholarship to Students’ programme organized by Janjati Shiksha Samiti (JSS), an NGO, at Kevijau village in Dimapur, the Governor said knowledge should make people realize their debts to society and the country.

Commenting on the present system of education in the State and country, Acharya pointed out that graduates were not employable and had become redundant, and hence stressed for skill development.

The Governor said it was for this reason he had urged colleges and universities in the State to introduce skill development courses, which would open employment opportunities, avenues for self-employment and empower graduating students.

He also called for a dialogue between industries and universities so that the latter knew the kind of graduates required. 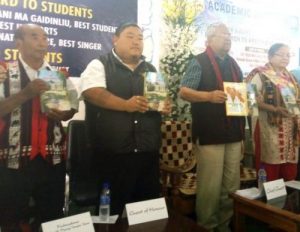 Pointing out that English was being favoured in the country, he stressed that content of a speech should really matter and not the language in which the speech was delivered.

He also advocated for a primary education system that made learning of mother tongue mandatory.

Referring to Padma Shri Piyong Temjen Jamir, the Governor regretted that he was yet to be formally recognized by his own village.

Speaking on the occasion as guest of honour, Higher and Technical Education Minister Temjen Imna Along Longkumer called for promotion of Hindi language in Nagaland and said ‘today, each and every person of us as Indians should be able to stand up and speak in Hindi.’