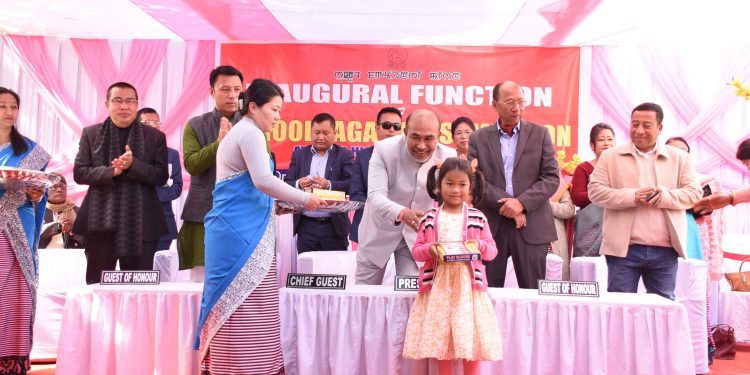 The same were inaugurated under the State Government’s ambitious ‘School Fagat-Hansi’ Mission, one after another on Wednesday.

The ‘School Fagat-Hansi’ mission was launched on January 18 last year with an ambitious objective to give renewed thrust towards improvement of government schools both in terms of physical and manpower infrastructure to enhance enrollment.

In the first phase of the mission, one government school each in all the 60 Assembly constituencies of the State has been selected for up-gradation as model schools so that it can be run and developed in a uniform pattern.

The state chief minister N Biren Singh, Speaker of the state Assembly Yumnam Khemchand along with forest minister Th Shyamkumar and education minister Dr Th Radheshyam briefly visited and attended the inaugural functions briefly along with some MLAs including opposition.

The main function was held at SK Ideal High School, Ngairangbam under Konthoujam constituency wherein Biren informed the gathering that a sum of Rs 43 crores had been earmarked in the Revised Estimate apart from taking up other intiative including the re-enrolment of 14000 drop-out students in the government schools after the launching of the mission.

In his speech education minister Th Radheshyam said the mission would definitely become a great success as it is being run under a proper guideline unlike other initiatives implemented in the past.

The Minister also said the mission had been conceptualized by the Government with a firm commitment, a clear vision and a strong determination to transform the government schools and bring a change in the pattern of educating children.

Earlier in another function, forest minister Shyamkumar said the vision of the chief minister has paved a way for the revival of the government schools of the State.

He further said improvement in the law and order situation in the State has further helped in the free passage of the school teachers and staffs.