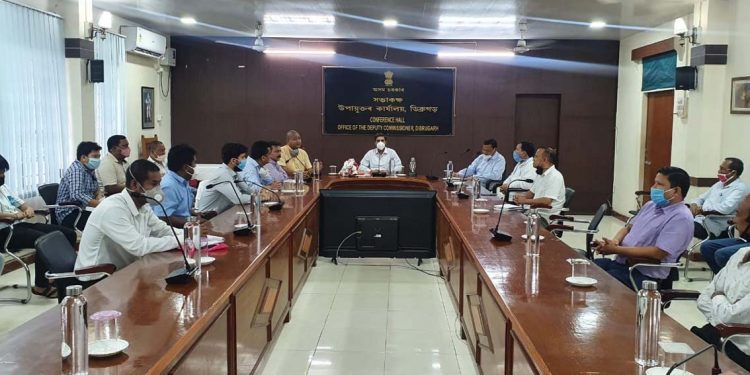 Prof Jai Prakash Verma on Thursday took charge as the first Vice-Chancellor of Sri Sri Aniruddhadeva Sports University at Chabua in Dibrugarh, which is the first sports university of its kind in Assam.

With the aim to boost all-round development of sporting activities in Assam in a scientific way, the university was established by the Government of Assam vide The Assam Sri Sri Anuruddhadeva Sports University Act of 2018 .

In connection with this, a felicitation ceremony was held in the conference hall of the deputy commissioner’s office in Dibrugarh to felicitate the newly-appointed Vice-Chancellor.

Addressing a meeting, Prof Jai Prakash Verma thanked the Assam government for considering him eligible to take up this great task further.

In his speech, he said he hoped to complete 90 per cent of the infrastructure development works of the university within the next three years.

He also elaborated on the four verticals he plans to adopt in the future course of action, first of which is knowledge creation and doing research in the field of sports, secondly, to identify new sports talents and train them in a scientific manner.

Thirdly, nurturing and grooming of budding players from the age of seven onward and finally, to motivate every section of people from the society to stay physically active for a healthy society.

During his speech , he admitted that the positive vibes he received from the Assam chief minister and from each and every delegate present in the meeting from different sections has given a boost to his morale to proceed towards successful completion of the mission entrusted on him.

The office of the Sri Sri Aniruddhadeva Sports University will function from the second floor of the office of the District Industries and Commerce centre ,Dibrugarh for the time being.

In his speech, the Chabua MLA said it was a moment of pride for all the sports lovers and sports fraternity as well as the sports society of Assam. He said that with the collective efforts from all sections of the people the mission of establishing sports university can be successfully completed.

MLA Rituparna Baruah said that it is like a dream come true under the able leadership of Chief Minister Sarbananda Sonowal and he shall render all sort of help and cooperation for successful completion of the same.

Assam Olympic Association Assistant Secretary and DDSA General Seceretary Niranjan Saikia expressed his gratitude to Prof Jai Prakash Verma for taking charge as the Vice Chancellor amidst the Corona crisis and also thanked Chief Minster of Assam for keeping his commitment to the people of Assam.