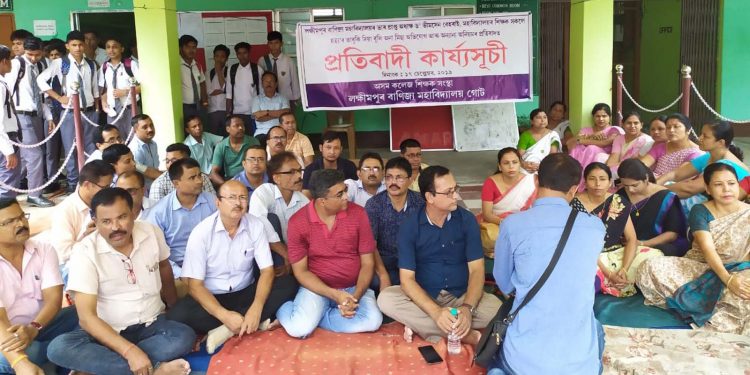 The agitation by teachers and non-teaching staff of Lakhimpur Commerce College over a news report published in a vernacular daily on Tuesday involving the principal-in-charge of the college led to the formal apology by the later.

As the news appeared in the daily on Tuesday, the unit of Assam College Teachers Association, Lakhimpur Commerce College along with faculty members of non-sanctioned posts and non-teaching staff of the college went for a sit-in protest inside the college against that accusation.

They were joined by the North Lakhimpur unit of All Assam Students’ Union (AASU) and some ex-students in solidarity with the agitating teachers.

Later, in front of the media and Lakhimpur district AASU, North Lakhimpur unit of AASU and ex-students, Dr Bhimasen Behera appeared before the agitating teachers and staff of the college and tendered unconditional apology for his act in making false accusations against fellow teachers.

He also ensured giving a written statement to the press about his apology.

It may be recalled that Dr. Bhimasen Behera has been in a conflict with the teaching and non-teaching staff of the college since May this year.

It all began when he made one junior teacher as principal-in-charge and examination centre in-charge on May 19 while going for an outstation leave by superseding 21 senior teachers.

After that, Dr. Behera did not seek the extension for his principal-in-charge position from the Director of Higher Education, government of Assam, as he had filed a case in Gauhati High Court for his appointment as the permanent principal.

For that non-extension, the entire staff could not get their monthly salaries for three months from May to July this year.

This prompted the Director of Higher Education, government of Assam, vide order No G(B)AC/313/2014/181 (dated Kahilipara, July 30, 2019) to entrust the power of drawing and disbursing officer (DDO) of Lakhimpur Commerce College to Inspector of Schools, Lakhimpur District Circle with immediate effect till the appointment of a regular principal for smooth functioning of the day to day activities of the college.

Interestingly, the last approval order by the DHE, government of Assam, vide order No. G(B)AC/122/2015/216 (dated Kahilipara, March 18, 2019) for the extension of Dr. Bhimasen Behera’s service as principal-in-charge of the college, there has not been any further order for him for the extension of his appointment as principal-in-charge and DDO of Lakhimpur Commerce College and secretary of the governing body of the college after the completion of the three months period on April 30, 2019.

In that case Dr. Bhimasen Behera is not the Principal-in-Charge of Lakhimpur Commerce College officially. The term of the Governing Body of the college has also been expired so far and needs to be re-constituted immediately, the agitating teachers said.