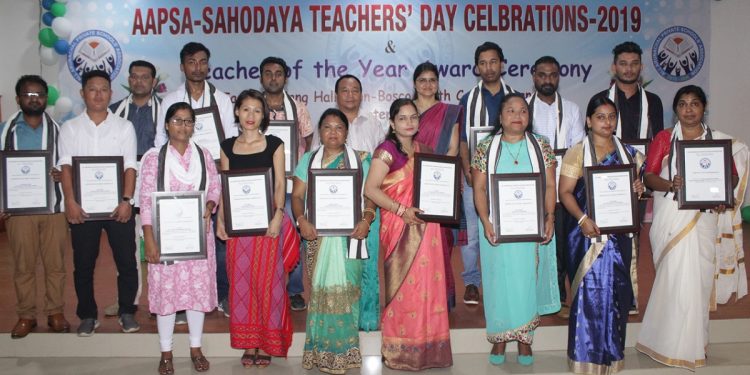 Arunachal Pradesh education secretary Dr Madhu Rani Teotia on Wednesday has called to strengthen it more and to enrich the overall educational scenario of the State.

He made this appeal to the teachers and principal of all private institutions, particularly the All Arunachal Private Schools’ Association (AAPSA) to extend their support to the department of education.

“Let us the government schools learn from the private one and vice versa, let us help each other for the greater interest of the students,” Dr Teotia said.

H also added that a lot can be accumulated through organizing a mutual interaction between the teachers and principals of government and private schools.

The education secretary was speaking at the AAPSA-Sahodaya Teachers’ Day celebration which was organized here at the Tadar Taniang Hall of the Don Bosco Youth Centre on Wednesday.

Dr Teotia further informed that the AAPSA would soon constitute a panel of principals to disseminate knowledge on “the best practices in private schools” and it related matters.

The secretary also announced that, ‘like in the previous year, two private school teachers will be receiving the State award for the best teachers during the Teachers’ Day celebrations hosted by the government’.

Earlier in his speech, AAPSA president Techi James expressed great satisfaction over the way the partnership between government and private schools have grown.

Vice president Rev Fr Joshua Gangmei appreciated the tireless efforts that Madhu Rani Teotia has put in to improve the educational scenario of the State and also the proactive approach she follows with private schools.

Fr Gangmei further exhorted the principals of all the private schools to extend their collaboration and cooperation to the executive committee of the AAPSA to strengthen it further.

The day also saw ‘Teacher of the Year’ awards being presented to the educators.

In all 261 teachers and a large number of students from various private schools of the Capital Complex took part in the programme.

Various cultural items were presented by the students to mark the day.