An Analysis of Assam’s Agriculture Sector 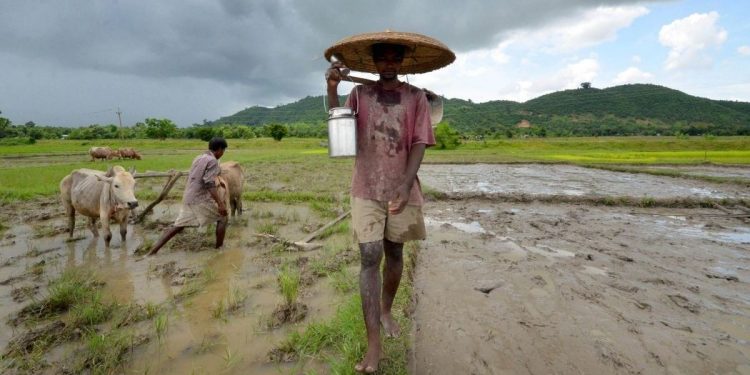 The agricultural sector of Assam has immense potentialities. Especially because of the presence of Brahmaputra and Barak River, this possibility is quite high. These two rivers keep the glebe fertile throughout the year.

Recent study conduct by Wirally shows that Assam is one of the top five most convenient states of producing varieties of crops around the whole of India.

However, it doesn’t consist that Assam’s agro-industry is completely free from obstacles. Of course, as its potentialities; it has so many obstacles on the road.

Through this article, we will be making a critique of the agricultural system of Assam.

Why Assam has a better probability than other states of India?

The fertility of the Barak and Brahmaputra valley

For the very first time when Ahom’s entered the valley of Brahmaputra, they saw something miracle here.

And they expressed their feeling with these four words – ‘Mun Dun Chun Kham’. This means the country of golden grain.

The soils of Brahmaputra and Barak River’s valley are so much fertile that it is possible to produce most agricultural crops that can be produced in most parts of the Indian sub-continent. Even the weather is quite compatible.

We can’t ignore the truth that Punjab, Haryana, West Bengal, Maharashtra produce more crops than Assam. But analyzing the other side we found that they use many artificial techniques to make it possible.

Probabilities are it will overpass these big players.

The unstoppable growth of unemployment

No doubt that unemployment is one of the worst social problems. But in the case of Assam agriculture, this can be used in a good direction.

In 2020 Assam has more than 17 lakhs of educated unemployed and 3 lakhs of uneducated jobless people.

If these people are attracted through a proper ‘agro-entrepreneurship’ education system then I think this worst problem can be converted to a better probability.

Tea is the main commercial crop of this state. Even, the land is world-famous for this green grain.

Every year Assam alone produces more than 57% of whole India’s tea production and supplies it to different states and countries around the globe.

Depending upon Assam’s tea production, India upgraded its rank into number 2nd position after China. (2019 report)

Along with tea, it exports rice, jute, areca nuts, and more other crops to other places. There are still so many possibilities for rice, tea and jute cultivation in Assam.

Implementing modern ideas in agriculture will definitely grow this region’s socio-economic condition to a better level.

Which are the main issues regarding the agriculture of Assam?

From thousands of year’s Assam has been suffering from flood problems.

Every year, especially during the rainy season (May-August), the Brahmaputra and its tributaries generate terrible floods in almost the whole valley.

And this flood destructs everything, from people’s lives to agriculture.

Assam’s farmers put a lot of effort into their agro land with the hope that they will produce something better than the last year.

But similarly, flood kills their hopes every year.

One can never even imagine the attachment of emotion of a farmer towards his paddy field, who has such no experience.

These wastages are really disappointing for a farmer and sometimes it becomes enough to left out the job forever.

Most people in Assam never approach agriculture as a career. No matter are they educated or not, but 98 percent of people never want to be a cultivator in this state.

I don’t want to talk about others; even my parents don’t want me to be a cultivator.

They always taught me to find a government job or something else; but cultivation, stay away.

Assam’s social environment is something like that a person can never get actual social support for doing this job. Although so many practical causes work well behind this serious fact.

A few major causes of them:

Its government duty to create a better environment to encourage farmers for doing more, but Assam’s condition is contrary to it.

Instead of encouraging small farmers, the government always takes those decisions, which harms farmers a lot.

Whether it is through grain prices, seeds price, or steps against syndicates. Everywhere these poor people get pissed off.

Even some people who have been appointed to give information related to agriculture, have no knowledge over their own subject or sometimes they don’t want to help visitors.

Around a year back, I went to an agriculture center near my home town. I went for asking them to help me in Mushroom farming.

But, when I talked with one of the employees (a woman) she told me, go and get more than four people. We don’t teach only one person.

I felt, was it my duty to bring more people to the center?

It’s their duty to teach me, even after I was alone; but ironically they denied my request.

How to solve the issues?